Why Leaders Must Coach with Compassion featuring Richard Boyatzis 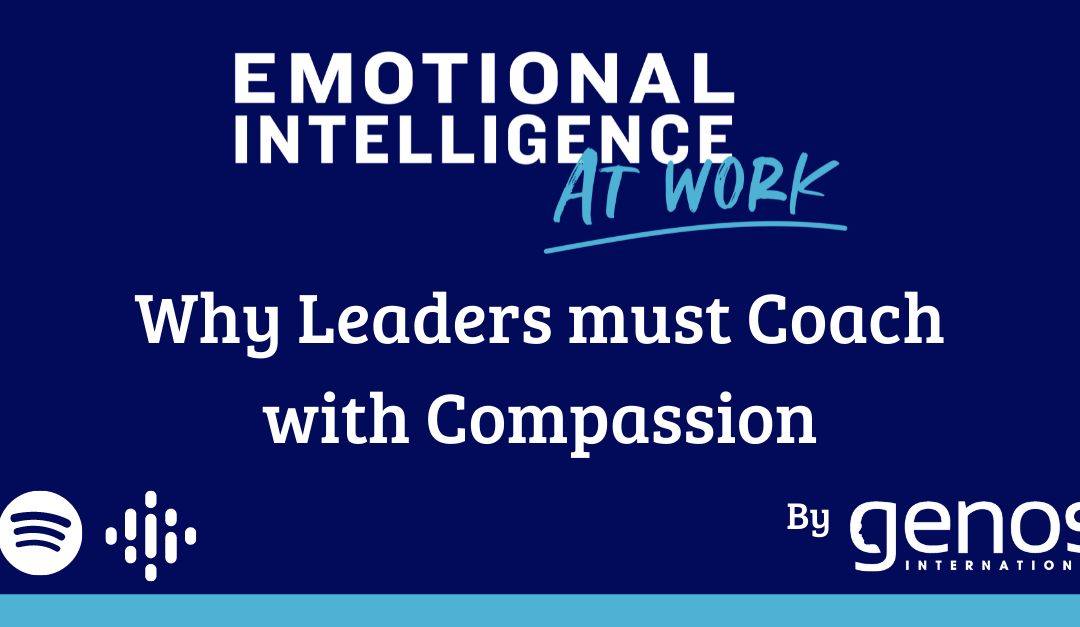 A big part of any manager or leader’s job is to help people change – yet we often overlook the way we tackle this. Coaching is often approached from a lens of compliance, that is, with set ideas of how people need to act or change. While the best of intentions may drive this style, trying to ‘fix’ others is far from effective.

In our recent EI at Work podcast, we were honoured to be joined by distinguished professor and author Richard Boyatzis to discuss why leaders must coach with compassion. 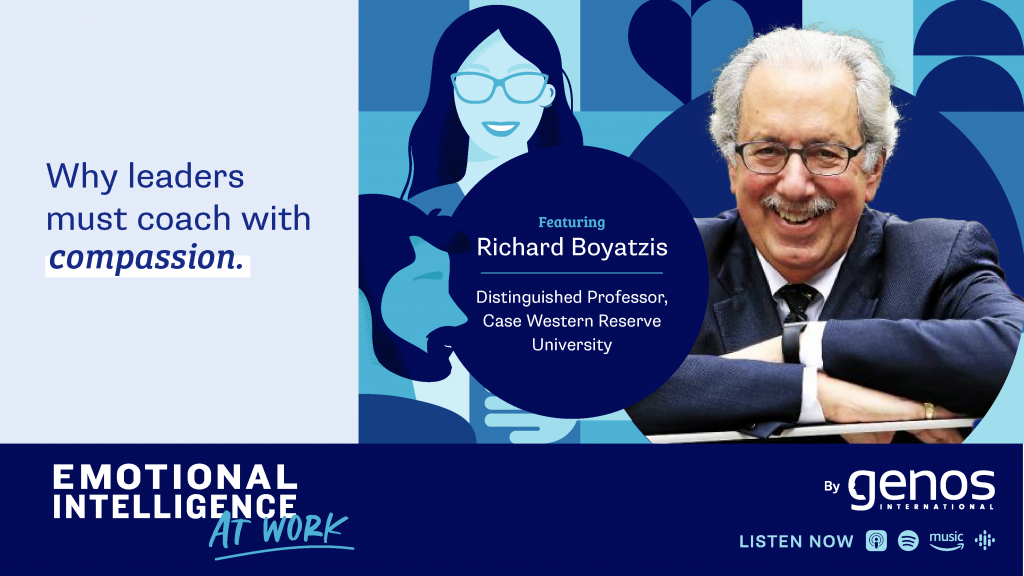 The following is a shortened, edited version of the transcript from EI At Work episode 3. Listen to the full episode here.

In this episode of EI At Work, university professor of Case Western Reserve University, Richard Boyatzis joins our hosts Ben Palmer and Marie El Daghal to discuss the difference between coaching with compassion versus coaching for compliance, and why only the former can ensure learning and growth. Richard has written over 150 articles on leadership and more recently, he co-authored the book Helping People Change so there is no one better to have on the show to talk about this very important topic.

Welcome to Emotional Intelligence at Work brought to you by Genos International.

Marie: Okay, let’s start with a practical example of coaching with compassion. Let’s assume I’m a leader demonstrating low emotional intelligence. I’ve gone through a 360-degree measure with a coach or someone in HR and I’m soon to be informed that I have not scored well. I’m already feeling quite stressed and anxious, how does a person delivering these results do so with compassion?

Richard: Let me use an analogy to start, if you have a spouse or partner or if you’re a parent, the same issues are going on, the same dynamics, so how well does it work when you approach your spouse or partner trying to fix them? When you go in and try to fix somebody, how does it feel, how does it feel when your in-laws tell you how you should dress your kids? It feels about the same way when you get a managerial review, performance review and your boss comes into that last part to say, okay, what should you do differently next year?

The problem is that most of the time when we are trying to help someone with good intentions, maybe but typically I’ll grant that the person receiving it feels like they’re in the presence of a helping bully. And it’s a form of aggression and the person who’s doing it says, yes, but, you know, we have to get to our objectives. Is this the best way? All of a sudden, our pressure to get to certain specifics, our pressure of time and the fact that most people are in management positions, who don’t want to be, they really don’t enjoy leading and managing others, they want to do the stuff themselves.

Ben: Let me talk about how things are out there at the moment. I find that the recipient of these 360-degree feedbacks is primed for you to come in and be task-focussed with them. You know, after reading your book and really stepping back and I’ve been trying to come into these sessions and be much more relational and just have a conversation and get to that kind of vision. What you find is some people are actually frustrated with the length of time that you’re taking to warm the conversation. You know, like they are ‘come on, aren’t you going to take me through my results and tell me where and what I need to do?’

Richard: Oh, come on, I mean, let me use an extreme example but, you know, we’re all used to having our bosses or our masters deal with whips and chains, I mean, it’s hyperbole, obviously we’re not. But the fact is that we’re socialised to be defensive. So, the problem is that because we’re used to doing that, people look at any assessment and immediately go for the, you know, what’s the bad thing? This silly sandwich model of say something positive and something negative, then something positive that’s stupid. Everybody just waits for the negative.

I wanted to focus on coaching or helping others with this. We’d set up these role plays, I had three that came out of exact experiences that I had with executives, different kinds of 360° profiles. I’d spend three- or four hours introducing people to all these concepts, why it’s important, psychophysiology of it all, then I’d put them in trios, and give them the client person had their profile. I give the data, the 360°, to the coach and I’d say, okay, coach them with an observer. Immediately they went to the weaknesses, they went to the gaps. I had said, spend your time talking about why is it that they even care about this before you look at it.

“Later, years later, as I do now, I say if you only have one hour with a person, spend 30 minutes on their vision, 20 on their strengths, five on their weaknesses and five on their plan that’s about the correct proportion to get change.”

Marie: Is that what you call the personal vision?

Richard: Personal vision, yes, they’re the answer to the question, if your life were absolutely perfect in 10 to 15 years, what would it be like? It starts with life as the main context, work as a subset and then we do a second round as we go to prep them in which they review the vision and then go into looking at the 360 results on their own. But the whole idea is to focus on the strengths. Even if the client wants to talk about the weaknesses to say, you know, we’ll get there, but let’s talk about what you’re bringing to the table. So, I say to people, this is what it’s going to feel like when you’re coaching. But what you need to do is to make sure that people are listening and feeling the fact that they have capabilities, it’s far more important for a person to appreciate what they’re good at than to know what they aren’t good at.

Marie: And so understanding that personal vision is one step or one part of coaching with compassion, what are the end pieces to that?

Richard: Well, we have found so far that if the context for the coaching or helping is a shared dream, you’re going to create a more open position. If the context is solving a problem or getting to a metric, you’re actually closing the person down. So, the idea is to step back, you do get to the goals eventually, you do get to solve the problem eventually, but the context is the bigger picture. The second thing we’ve been able to establish through the research is that the quality of the relationship is key, and we’ve used the label resonant relationships, but they’re really caring relationships. It’s the experience of mutual caring, of respect, which is captured by our use of the term compassion. And we also find that it somehow seems to rely on both parties being increasingly mindful, another fancy word for authentic.

Ben: One of the things I picked up in the book, Richard, that really got me thinking a lot was the example of the teacher, who wants to get the best out of her students and decides rather than sort of, you know, just pouring on with the curriculum and getting on with the job, she decides it’s actually I need to know the context of the students and where they’re coming from in order for that outcome to really occur.

Richard: That’s the key, that the question is, are you focusing on the other person? Do you understand their dreams? Do you understand how you can get somebody to give their all, to use their talent? When I was a CEO, I used to say to people, when you’re in the shower on Saturday, I want you thinking about client issues. Now, I was in my 30s and, you know, sometimes a bit of a jerk, but the idea was, if you want discretionary effort from the people that you work with, you want to capture quite literally their hearts and minds and their hearts and minds don’t get excited by a specific goal. If you want to manage somebody else, you want to help them do their job better. You want to guide them so that they are doing it in a way that serves your clients or customers’ needs better.

Marie: Is it enough that you know that one or two managers are doing it or coaching with compassion in an organisation or for real effect or change to take place? Does it have to be company-wide?

Richard: Actually, it doesn’t have to be company-wide. Let me put it in our context today. As soon as you bring something company-wide, a whole lot of the people that are going through it are going to experience it as coaching for compliance. You know, that they’re being forced to go there. So, to answer your question, Marie, I don’t have an empirical basis for this, but I have a feeling, I’ve watched a lot of organisations. My guess is the tipping point is about a third. If you can get about a third of the managers throughout supervisors, mid-level executives to be using these kinds of techniques, you’re successfully doing what we’re talking about.

Marie: I do wonder whether, I mean, I think about a younger me. If someone had asked me this question when I was 20, 22, 23 there would be parts of my personal vision that I’d be terrified to share, such as wanting to have a family one day, because I think a lot of young women often feel that sharing that might scare the employer or their manager away from offering opportunities for growth or development, they think well, she’s going to have kids and just disappear on us so how do you overcome that?

Richard: Well, again, it goes back to the quality of the relationship. You don’t share these things if you don’t feel like there’s an open, mutual, caring, trusting relationship and that’s the problem. If managers don’t see this as a part of their role, then they’re squelching their ability to motivate and engage people, which is why I think the engagement numbers are so abysmally low.

So, I think the issue is Marie, that no, you’re not going to share it unless you feel cared for. It’s also why I think coaching is so useful. I think coaching will replace face-to-face training. Now, Covid is speeding that up, but I said five years ago it was going to replace face-to-face training primary as the primary source of development. I think peer coaching has even more promise than one-on-one coaching because, you know, the 25,000 people in an organisation that aren’t at a high enough level to get somebody to pay for a coach still want development. So, I think those are the things and to the extent that a person doesn’t voice them, then they’re not likely to get there.

A big thank you to Richard and our hosts for sharing their insights with us.

Stay up to date by subscribing to EI at Work and listen to other episodes here.