Can A Leopard Change It’s Spots? A New Episode Of EI At Work 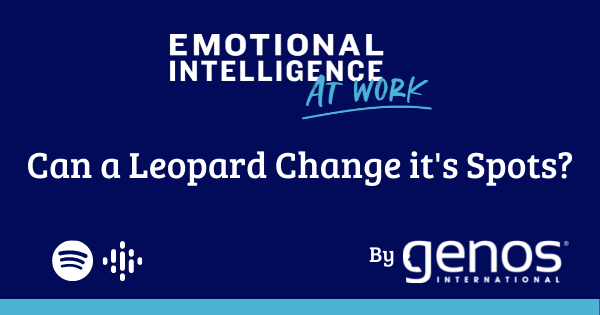 Can you teach an old dog new tricks? In the latest episode of EI At Work, emotional intelligence expert Cary Cherniss shares his view. Cary is emeritus professor of Applied Psychology at Rutgers University. He is also co-chair of the Consortium for Research on Emotional Intelligence in Organisations, along with his colleague and friend, Daniel Goleman. Together with Marie el Daghl and Genos International CEO Dr. Ben Palmer, they discuss whether an established leader known for negative behaviours can ever genuinely develop emotional intelligence.

The following is a shortened, edited version of the transcript from EI At Work episode 2. Listen to the full episode here.

Marie: Recently, an Australian federal minister was ordered by our prime minister to undertake empathy training as a result of some very public bad behaviour. And it got me thinking, does it create a good environment for change?

Cary: Well, it’s interesting. You know, usually, it’s not a good environment but I’m reminded of an incident that I was involved in several years ago. I was sitting in on an emotional intelligence training programme at a large corporation here in the U.S. and I noticed there was one guy in particular who was really trying hard. He was having a hard time in a role-play or something but he was really engaged. He was really committed to doing it. And I talked to him during one of the breaks and I asked him why are you taking the programme? And what he said really surprised me. He said, ‘well, I have been accused of sexual harassment more than once. And my boss told me that I have to take this training, and if I don’t then I’m going to be fired. And, you know, I have a wife and children. I’ve really got to get this right. You know, when these incidents have occurred, I wasn’t even aware that I was being offensive.’

“Normally it does work better if the motivation comes from more positive sources, but the person really has to be committed. They really have to be willing to do some hard work if the training is going to work.”

Ben: I think that forcing someone to go into the training is perhaps not necessarily the best method. But I think a very mature conversation with someone that says, you know, look, the job you’re in requires good levels of empathy, self-awareness, the capacity to create a positive work environment for others, how well do you think you’re doing at that? Would you like some professional assistance in that kind of area? Because ultimately, I think if you can have that kind of mature conversation, this is boss to their direct report, sort of, if you like, saying here’s an investment we’re willing to make in you if you’re willing to really give this a go. I found that kind of environment does work well for the individual who perhaps has the EI capacity but doesn’t have the motivation quite yet if that makes sense.

Marie: What factors would determine whether an established leader who has entrenched negative behaviours can improve through development?

Cary: One of the leaders that we interviewed for our work was a senior executive who had been very successful. He was very effective, very smart, very competent, a lot of experience in the job. And he had actually been recruited by this company from another company because he really stood out, but the culture was very different in the new company. He was used to a command and control. You know, if people aren’t doing the job, yell at them until they do and now is not working well in this new environment. And the CEO asked his VP for Human Resources to work with this guy to see if he could bring them around. So he became essentially his coach but this guy who we will call Manny wasn’t going to have any of it. I mean; he’d been successful for 30 years. He knew he was good. The problem was everybody else. And in fact, the first time this guy went into his office, he said he literally threw him out the door. But this VP for Human Resources had a lot of emotional intelligence and he persevered. One day Manny that the job wasn’t working for him, and that it wasn’t just the job, but he was also having problems with the mortgage on his house. After hearing this, the VP for Human Resources went to some of his people and they looked into it and they were able to help Manny out with this very tangible sort of need that he had that wasn’t even directly related to the job and that was what really get it. From then on, Manny was really open to what the VP was trying to do because this guy really went to the next level to help him with something that was really concrete and tangible.

Ben: The other thing I would say in terms of motivating people to work on their emotional intelligence is a lot of people who, let’s say, are quite average or low in emotional intelligence aren’t just average and low at work. They’re average and low socially, romantically, with their kids and so there’s another kind of leverage there, if you like, of motivations. Just to say this can help you in many aspects of your life as well.

Marie: In the case that a leader is going through EI training, how likely is it that the team will accept the change in their leader or manager rather than be cynical of it?

Cary: It’s a really good question because that often occurs, I’m sure and Manny’s case, it took people a while to really believe that this was real. A couple of things, first of all, it’s important in doing the coaching and the training that you really kind of inoculate people so that they’re prepared for scepticism and pessimism from their team. People are not going to believe it to begin with. But that’s okay because if you’re able to persist and you continue, if you consistently use these new skills, more and more people will come around and believe, that this really is working.

Marie: Is there anything formally an organisation could do to set the expectation with the team that change is coming or would you just let it happen organically?

“Yes, the organisation really plays an important role. We’re starting to look now at organisations that seem to be, “emotionally intelligent.” And what we’re finding is that the people are more ready to accept emotional intelligence, social intelligence training and working with people who were getting that training, if it’s being done throughout the organisation and particularly if it starts at the top.”

The organisations that we’re identifying that are really modelled on this, in just about every case they start at the very top, the CEO and the top leadership team, they go through the training first and then it sort of goes from, you know, from that to the mid-level managers, and down through the organisation. By the time it gets to the bottom, people really believe it’s real that leaders can change and show that that’s something that organisations can do.

Marie: What happens when someone says, no, I don’t want to change? I mean, in your book, Cary, you mentioned Eric Schmidt and how he was hired to effectively be a peacemaker and be the softer side to the Google founders. Is this approach the best approach to bringing EI into leadership in some cases?

Cary: Yes, in some cases, I think that very often it’s easier to change roles and responsibilities than to keep trying to change the individual to do something right. Another example from the book that you might remember is the president of this wholesale food distributor company. He would go out every year and meet with their most important customers to see how things are going and renegotiate the contract and it always went very well, except for this one executive at another company. And this guy really knew how to press the buttons of the head of the wholesale distributor, and no matter what he tried to do; this was a guy who, like all the leaders in our book, was very emotionally intelligent. But once you got in the room with this difficult customer, it just all went out the door and he would always come back kicking himself because he ended up with a really bad contract as far as his company was concerned. So, after talking with his mentor about the situation, he decided to send one of his executive to discuss the contract with that client and it worked much better. I think that’s another example of how very often just, you know, changing the role, giving the role to someone else who has the emotional intelligence skills perhaps that are better than in that situation makes a lot more sense than really trying to change yourself.

Marie: Your book outlines nine strategies of emotionally intelligent leaders, which makes it sound achievable or dare I say, easy. What are the top three most common obstacles or challenges that leaders might face the first time they use them?

Cary: The first one is it may not work. In fact, it probably is not going to work in every situation, if people expect that to be the case, then hopefully they won’t become discouraged and give up on everything. And also, recognising that emotional intelligence is not a panacea. You can be very emotionally intelligent and still not reach your end result all the time. But, you know, it’s sort of like in baseball, the batters go up and even the best batters all of the time, more often than not, will not get on base. A second obstacle, I think that people encounter in terms of when these failures occur is that it’s very difficult, people need to be aware that it takes time to get to the point where you can use these strategies naturally without even thinking about them and even when you’re using them a lot, when you’re in a stressful situation, it may all go out the door. And the third obstacle, which we’ve already talked about, is being in an organisation that doesn’t reward the use of these strategies. We talked in the book and I think the last chapter and ultimate chapter, what people can do when they’re faced with that situation. Sometimes they can work with other people to change the organisation, to make it more supportive. In other situations, you may have to think about going to a different setting or maybe even a different part of the organisation or where it’s rewarded more.

Ben: One of the things organisations often fail to do is actually provide the time for leaders to be emotionally intelligent or practice the development of it. I still find in workplaces today that leaders are meant to be leading a team and yet seem to be so piled up with task themselves that they’re just in a task-oriented frame and context all the time. It’s like learning to drive a car, you do need that time to really hone your skill and practise it in and get to that place where you can do it on autopilot.

A big thank you to Cary and our hosts for sharing their insights with us.

Stay up to date with EI at Work and listen to other episodes here.
Make sure to subscribe to our blog for content on emotional intelligence, coaching, leadership and more.