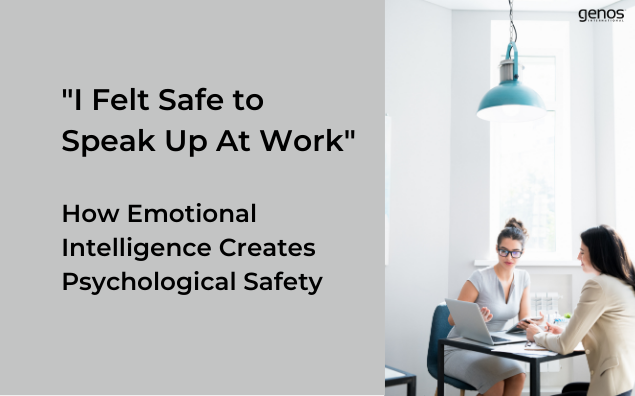 Psychological Safety and Emotional Intelligence… these two critical topics have become even more important in light of the pandemic and a dramatic shift in how we work. We thrive when we feel psychologically safe – in environments that:

“…respect us and allow us to feel included, feel safe to learn, feel safe to contribute, and feel safe to challenge the status quo. If we can’t do these things, if it’s emotionally expensive, fear shuts us down. We’re not happy and we’re not reaching our potential. But when the environment nurtures psychological safety, there’s an explosion of confidence, engagement, and performance.”
Timothy Clarke, author of ‘The 4 Stages of Psychological Safety’

If you think about some of the core competencies of emotional intelligence (e.g. self-awareness, authenticity and self-management), these traits all have an impact on creating psychological safety. When you’re aware of how your behaviours affect others, you will most likely be better equipped to deal with others in a more empathetic way, making them feel safer at work. Similarly, leaders who have authentic and open conversations with their teams are more approachable, and more often their teams feel comfortable to speak to them to raise concerns and speak about issues at work.

Emotional Intelligence and Psychological Safety is everybody’s business – whether you’re a team member anxious to create a better working environment for you and your colleagues, or a team leader or manager tasked with bringing a team together for great results.

We could tell you all the ways that emotional intelligence builds psychological safety, but instead, here’s a short video detailing an actual real-life case study of how one company and their teams felt safer to speak up after a Genos Emotional Intelligence Training.
Watch the video or read the text below.

“In December 2019, a formal complaint was lodged by two women against a male employee for poor behaviour. Over the next month, 15 more people (men and women) came forward with similar stories and complaints about this person. I interviewed them all and asked the same question to every person: ‘Why now? If this person’s behaviour has been going on for so long, why are you only just speaking up now?’ The answer was the same: ‘I didn’t want to lose my job’, ‘I didn’t want to be a nuisance.’, “If he found out it was me, he’d try to make my life miserable.’ – Nothing very surprising given the context… but it was ‘why now?’ that floored me. Every single person said it was because of Genos and bringing EI into the culture. They felt psychologically safe. One woman said, ‘I never would have had the courage to speak up for myself prior to Genos.’

In the months after the EI Program concluded, things that had been previously swept to the side and discounted (like poor behaviour & harassment), started to glare. People began to trust their leaders and HR and were more willing to be honest without fear of repercussion.”

This is a great example of how emotional intelligence training helps build psychological safety.

Psychological safety is the feeling that we are in an environment where we feel safe to bring our real selves into interactions with our team members – one where it’s not personally costly to make mistakes or ask questions. Everyone should feel like they can ask questions without being ridiculed for not knowing the answer, share critique without coming across as negative, or point out an error or issue without feeling like they are putting their job at risk.

Psychological safety is only possible when people show up to one another in an emotionally intelligent manner.

It’s so important to make your teams feel safe to talk about their issues. In the story above, employees only began to come forward because they felt safe enough to do so. Emotionally intelligent leaders are better equipped to facilitate these difficult conversations with their employees, leading to them feeling safer and more comfortable to talk about issues and concerns. In a lot of cases, like the one above, people don’t want to raise any problems because they are afraid of what will happen for speaking up. Will their boss reprimand them? Will the be judged by their peers? Will they be seen as negative for ‘complaining’?  Without their employers making the effort to ensure that people feel like they can talk about issues without being punished, problems like this, and so many others would just go ignored.

Want to learn more about how to build psychological safety in your organisation? Sign up here for access to the recording of our most recent masterclass ‘The Link Between Emotional Intelligence and Psychological Safety.